Today we're doing a simple rich & delicious noodle dish! I first made this by accident when I didn't reduce down my Shoyu pork( I know I said beef bare with me) all the way and when I left it my dad bloody came in, he thought it was reducing too much and added more water. I was so bloody livid, I just had a bowl of pork in weird broth so I thought screw it, I'll add noodles and just gave it to my brother. When I tried some on the other hand, my mind was blown and my rage went away. I weirdly vibed it.


Here in this recipe I substitute the pork with beef and slowly braise it or boil it or whatever it's called into a pretty decent quick-ish bowl of noodles. Don't get me wrong it'll still take around 1-3 hours though. what do you expect? If you want a faster bowl of noodles just go get some instant ramen.

(You'll Get around 2-4 Bowls with this recipe)

Beef Brisket- around 500-700 grams should be enough. You could also get any sort of beef chunks as you'll be cutting the brisket into cubes anyway.

Eggs- you'll be boiling these eggs so have as many as you want or however many people you'll be serving.

Tomatoes- 2-4 for an extra tangy flavour but you don't need to add these, up to you init.

Garlic- 4 cloves add more to keep them vampires away.

Ginger- an inch should do, I don't really know how other people measure out ginger.

King Oyster Mushrooms- 2-3 would be enough as they're quite big, but any other mushrooms will do as well if you can't find them in shops.

Chicken Powder/ Stock Cubes- 1 tsp is good or one cube whichever you get your hands on.

White pepper- 2tspn should be enough for a lil peppery touch.

Gochujang- 1-2 tbsp is more then enough if you really want to take it up a notch with this beautiful fiery paste, but if spice isn't your thing then just leave it out.

Soy Sauce- 1/2 cup should be good, get high-quality Japanese soy sauce if you can, it'll make all the difference


Noodles- what would a noodle dish be without noodles, bloody soup and no one wants that. I like using udon, but any ramen or noodles will be fine it's all down to preference. Hell, you can even use spaghetti if you want, after all, they're all just variations of pasta?

Finally Spring Onions- These are for garnish so use as much as you like.

1. Begin by chopping the mushrooms, I normally slice them horizontally, it just looks better to well... see mushroom, shaped mushrooms, if you know what I mean.

2. Quarter the tomatoes and put them and the mushrooms into a bowl together for later.

3. Now peel the garlic, alternatively, you can just crush them, making removing the skin infinitely easier also this saves you having to crush it after you've peeled it (I'm an innovator I know) put the crushed skinless garlic into the same bowl as the tomatoes and mushrooms.

4. If you haven't yet cut the ginger into an inch piece, an inch thick? I really don't know how to measure out ginger sorry. Anyway, do it now! and slice the inch into the 3 big pieces or finely slice it, I don't really like eating ginger and I make big chunks so I know what to keep away. Now put it into the bowl from step 3.

5. Chop the spring onions and put in a bowl save it for later.

6. If you bought beef chunks or have already cut the brisket into cubes ignore this, but if you haven't, do it now!!!

7. Now for the cooking to begin! Start by putting the beef into a cold pan, fill with cold water just enough to cover the meat by half an inch and bring to boil.

8. Once boiling, drain the water and all the gunky stuff that'll appear on the surface of the water.

9. Fill the pan back up with cold water and repeat step 7 and 8.

10. Now for the actual soup. You may need a bigger pan or pot then you used to boil the beef, who knows. I don't know what pan you're using. Anyway in a big pot put in your beef fill with 1.5 litres of water. Throw in the tomato, mushroom, garlic, and ginger from earlier. You can also add the mirin, soy sauce, chicken powder, white pepper, and the gochujang if you want it spicy if someone you're serving doesn't like the heat just put it into individual bowls later. Slightly cover the pot and bring all the ingredients to a boil.

11. Once boiling you can add the eggs just to boil for however long you want them(I like them hard-boiled). I'm not saying how long to boil an egg for it's basic you should already know.

12. When the eggs are ready take them out and put into ice water to stop cooking further.

13. After removing the eggs, turn the heat down and simmer for around 1-3 hours, it all depends on how big or small you cut the beef, take a piece out and try it to see how tender it is. Also, crush the tomatoes into the soup they should be soft enough now and release that flavour.

14. After the eggs have cooled down peel and save for later.

15. After around an hour you can remove the lid to reduce the soup for a thicker, richer broth if you wish. If not just leave the lid slightly covered until meat is soft and tender.

16. Once the soup is ready and to your taste, you can start on the noodles. In another pot filled with water and bring to boil.

18. Now we can start assembling the dish! Begin by putting noodles into the bowl then the meat and mushrooms, then add the broth to cover the noodles. Finish it off with the spring onions and the egg sliced in half. (Optional: This is the last point you can add the gochujang as well to whoever wants to bring the heat!) This recipe was a lot longer then I thought I'm sorry but if you stayed with me until the end then I hope you enjoy it! 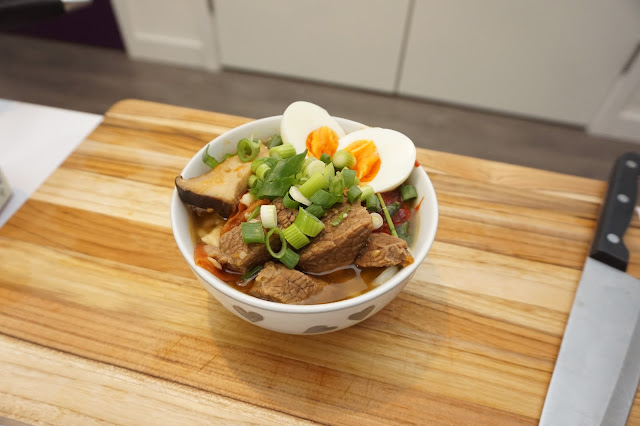 
Whenever I'd come home I'd always get my mother to cook me this dish, with rice and a fried egg it always made me, young chubs thing JP so happy. What more can you ask for? Meaty, spicy and fragrant. I'm not good at explaining these things sorry, so I'll just go straight to the recipe.

Ingredients: (This will most likely serve 2 people.)

Minced Meat/ Ground Meat- About 500g should be okay, any mince is fine I like using Pork, Beef and Chicken are both fine too even Lamb if you vibe the smell and flavour, you could even use fish apparently but I've never done that.

Lots of Garlic- Probably a whole head if that's what it's called.

Chillis I always use Birds Eye chillis- Use as many as you like. You know what you ca…

This recipe combines my two favourite things fried chicken and Sriracha chilli sauce. Sriracha is also near where I was born (I also lived there for 3 years) in Chon Buri, it's no wonder I use it for pretty much everything to take up the heat a bit. Home town represent! Anyway, this dish is super simple and easy to make plus it's oven-fried so it'll probably be healthy, well healthier than putting your chicken in a vat of oil init.

Ingredients:  (Serves 2 People)
Chicken Thighs- 4 thighs, bone-in, skin-on thighs, everyone loves that crispy skin, leave the skin on! Plus thighs are super juicy, what's not to love.
Light Soy Sauce- 1/4 cup this will be for that sweet marinade it'll bring out the thighs flavour and tenderize then too (I don't know if that last bit's true, I just read it somewhere.)
Sriracha- 1/4 cup apart from the chicken this is the real star of the show!
Flour- 2 cups, all-purpose flour is good you could also use cornflower too for a bit mo…